Shapeshifter, a solo retrospective exhibition by Carmen Brown, will open on Monday 7 October at Pūmanawa Gallery The Arts Centre in Christchurch.

Marking Brown’s return to The Arts Centre after an absence of nearly ten years, Shapeshifter presents Brown’s unique way of seeing, offering to Christchurch a defiant sense of place, regeneration, recovery and hope. 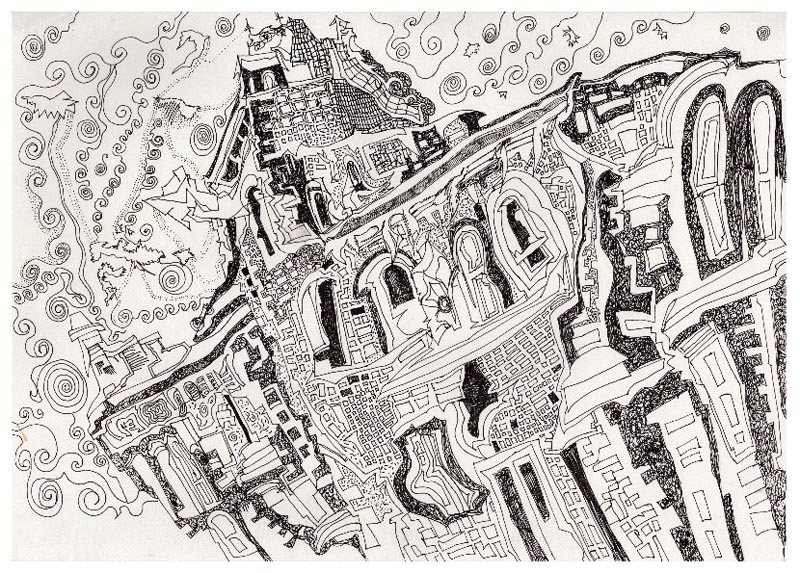 Brown approaches diverse subjects including buildings, people, places, flowers, ships and ladybirds with humour that is in turn menacing and whimsical, with cartoonish renderings of historical and local characters such as Captain Cook and The Wizard of Christchurch.

Depicting shifting dimensions that echo the destruction of buildings in the earthquakes, the work in Shapeshifter includes well known Christchurch landmarks The Arts Centre and the Cathedral.

“I like dismantling buildings and blowing them all out of proportion, exaggerating them, twisting and distorting them,” Brown says.

To Brown, the Cathedral represents Christchurch and its people. One work portrays the cathedral as it was falling, as a vessel reminiscent of Noah’s Ark. “I did it like it hadn’t quite crumbled, to try and save it, but it wasn’t saveable. The force of the earthquake was too strong.”

Other work is futuristic, envisaging parallel universes, unknown worlds, and the cosmic. Brown hints at the possibility of time travel. Prior to the earthquakes, Brown had a studio at The Arts Centre, had held two solo exhibitions, was featured in an Artsville documentary film, and had won a national art award.  After the earthquakes that trajectory was disrupted – she lost her home, her studio, and much of her work. The artists Brown had worked alongside at The Arts Centre had dispersed. 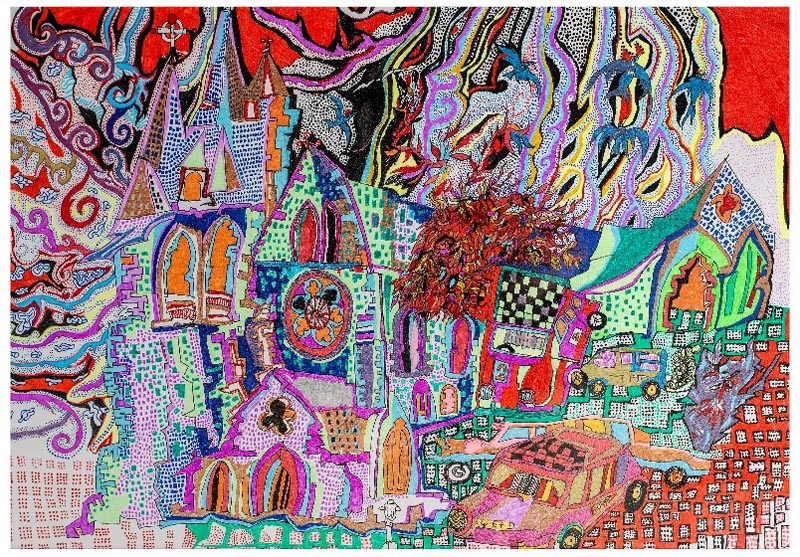 Shapeshifter was organised by Ōtautahi Creative Spaces, a creative wellbeing organisation with a mission of getting creative with mental health, of which Carmen Brown is a participating artist. Shapeshifter was supported by a Creative New Zealand Arts Grant.

Kim Morton, director of Ōtautahi Creative Spaces, says it has been a privilege to support Brown to prepare for this exhibition. “Carmen has tackled subject matters that are both confronting and healing. Carmen’s work as an artist has helped her rebuild her life after the earthquakes.”

Brown is delighted to be exhibiting at The Arts Centre again. “It has brought back many memories and has inspired me to do a lot more. Art is my life.”

Shapeshifter Exhibition Offers Story of Hope
+ Text Size -
Do NOT follow this link or you will be banned from the server!